SANBI-GBIF was invited to showcase its experiences with data mobilisation and other aspects at the Biodiversity Digitization Conference. 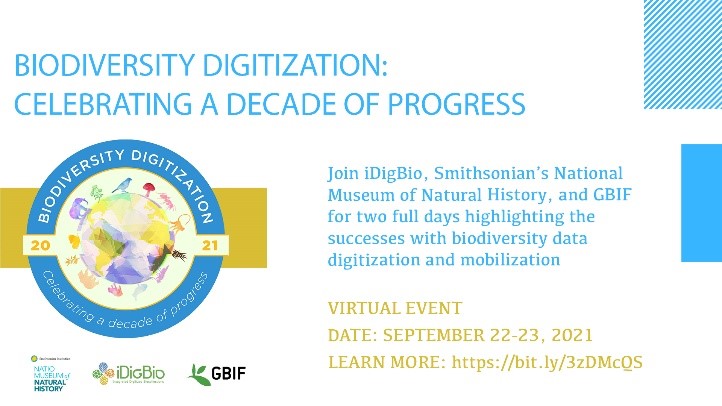 A flagship Biodiversity Digitization Conference was held from the 22nd - 23rd September 2021, hosted by The U.S. National Museum of Natural History – Smithsonian (NMNH), Integrated Digitized Biocollections (iDigBio), and the Global Biodiversity Information Facility (GBIF). SANBI-GBIF, as the South African Node of GBIF, was invited to speak at the Biodiversity Digitization Conference: Celebrating a Decade of Progress. The purpose of this event was to showcase national and international successes in the digitization and mobilization of biodiversity data since 2010 and the future impact of digital data on biodiversity science and preservation.

SANBI-GBIF presented a plenary talk titled: The African Coordinating Mechanism for Biodiversity Information Management: Strengthening Science, Technology, and Innovation in Africa. This talk focused on the extensive experiences of the Node with biodiversity data and organizing people in a session entitled “What’s Next” (e.g. Partnerships, new data concepts) and picked up on aspects such as Africa engagements, conveyor belt technology for mass digitization and data mobilization by the South African community. Other interesting talks included 3D imaging, conveyor belt technologies for mass digitization, deep learning techniques and its applications, linked data approaches, community engagements supporting data mobilization at many different levels (including national and regional), sustainable funding and many more.

Further information including the conference agenda, very exciting virtual tours of the Smithsonian (NMNH) and video presentations (oral and poster) of the conference can be found by clicking here.